Well, you might find it hard to believe that men are capable if thinking about things other than sex. It’s true. Although, how often they think about those other things is still out there for debate.

Have you ever wondered why do men love sex so much? Beside the fact that it’s awesome and feels great? Have you ever thought that maybe sex is men’s way to express their feelings?

Let’s face it, men aren’t really good at expressing their feelings, but they are great at having sex.

Some experts believe that men use sex as a way to show their feelings, but it’s turned into a big stereotype that leaves them looking less than desirable to women. Then, perhaps, one thing that men want more than sex is to be able to express their feelings…and of course, receive those feelings in return.

Are women as good as they think at expressing their love?

Although women claim to be really good at expressing their feelings, some experts say that they are actually not great at expressing their love to men. They ostensibly love them, and tell others they love them. However, when it comes to expressing those feelings to their male partners, women sometimes fail just as men do. As we mentioned, men use sex as a way to express their feelings. On the other hand, they also need to have sex in order to feel those feelings are being reciprocated.

See where I’m going with this? It’s like a vicious circle. Women reject men, even men who they love. That makes men feel like they aren’t loved, even when women tell them they love them. And it’s never ending cycle.

Why women can’t express their love through sex

According to experts, there are a number of reasons why women do not feel comfortable expressing their love through sexual activity.

One of the reasons cold be that when men ask for or initiate sex, women can’t stop thinking what the heck it means beyond the act???????

Their first thought is that it is a means to an end, and definitely not an expression of love.

After all, women have been conditioned to think of men as “men” and “men” don’t need anything. Women are thought to be the needy ones in the relationship.

Another reason why women often reject a partner’s sexual advance is because women associated being needy with being childish. If a man wants to “cuddle” it may spark images of boyhood and childish intimacy and women associate them with their children.

It is really difficult for women to draw a line when they are nurturing men, because it brings about feelings of motherhood for them.

Last but not the least reason is because they don’t trust their feelings because some women have reported that men who said they “needed” them, later beat them and treated them poorly.

Let’s make it clear –  not all women feel this way, of course although sometimes these things manifest themselves in a way that not even women understand.

Women should let go their perception about men and sex. Sometimes, things are not always what they seem, and this certainly could be the case when it comes to what women think of men and sex. 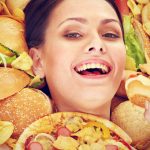 5 Reasons Not To Eat At McDonald's

Length Of This Finger Reveals The Secret Of Your Personality....