Caused by environmental factors such as pollution and diet, a study review by University of Manchester scientists has strongly suggested that cancer is a modern, man-made disease.

The illness has become so common that today one in 30 people living in the UK either has cancer or is in remission. It is estimated that by 2030 three million people in England will have had some form of cancer.

Men are now surviving prostate and bowel cancer while women with breast cancer have a better outlook than ever before. However, the UK still lags behind other European countries in terms of cancer survival.

Cancer Research UK claims that part of the issue is modern unhealthy lifestyles. It is estimated that about a third of cancers are caused by smoking, diet, alcohol and obesity.

Another problem is that many cancers are detected too late. Although there are national screening programmes for certain cancers, like breast and cervical, public awareness of symptoms and the need to seek help early is still too low.

Additional issue is access to treatment. People wait too long to see a doctor for speedy diagnosis and treatment.

The researchers spent a great deal of time studying mummies, fossils and classical literature before arriving at their conclusion.

Paleopathology is the study of ancient remains looking for evidence of disease, especially the cause of death. Most ancient remains are bones, and so pathological examination is limited to this tissue. However, as we know some cultures (most famously the ancient Egyptians) practiced mummification, which preserve soft tissue, given us a potential window into ancient epidemiology. What is uncontroversial is that ancient mummies rarely show signs of cancer. A 2010 review (the one that primarily sparked the “cancer is manmade” meme) did conclude that cancer is rare in mummies, but was much more conservative in its conclusions than the headlines:

‘A striking rarity of malignancies in ancient physical remains might indicate that cancer was rare in antiquity, and so poses questions about the role of carcinogenic environmental factors in modern societies. Although the rarity of cancer in antiquity remains undisputed, the first published histological diagnosis of cancer in an Egyptian mummy demonstrates that new evidence is still forthcoming.’

In 2011 a case of prostate cancer in an ancient mummy was published.  A 2012 review of soft tissue tumors found 4 cases of malignancy and 14 cases of benign tumors. A 2014 study presents three cases of metastatic bone cancer in ancient Roman remains.

The researchers claim the disease is a man-made disease fuelled by the excesses of modern life. This is because tumors were rare until recent times, when pollution and poor diet became an issue.

In the past, some researchers have argued that the ancient Egyptians did not live long enough to develop cancer. To dismiss this weak argument, the researchers pointed out that other age-related disease, such as hardening of the arteries and brittle bones, occurred during this time.

However, even if we accept the current evidence that tumors were indeed rare in ancient populations, that does not lead directly to the conclusion that cancer is a product of modern life. As one researcher put it:

‘The rarity of tumors in mummies is a debated problem; short life span of past populations, scarcity of mummified remains arrived to us in comparison with skeletal remains and technical difficulties to detect neoplastic lesions in ancient tissues seem to be the main reasons of the rarity of findings. It is important to pay maximum attention to any little sign of neoplastic lesion in ancient human remains, in order to increase our limited knowledge about the type of tumours and relative incidence afflicting our ancestors.’

The journal Nature Reviews Cancer reports that fossil evidence of cancer is not solid. Even the study of thousands of Neanderthal bones has provided only one example of a possible cancer. It is said the ancient Greeks were probably the first to define cancer as a specific disease, and to distinguish between benign and malignant tumors.

The first descriptions of operations for breast and other cancers are provided in the 17th century. On the other hand, the first reports in scientific literature of distinctive tumors only occurred in the past 200 years. Nasal cancer in snuff users appeared in 1761. Scrotal cancer in chimney sweeps was also discovered in 1775. 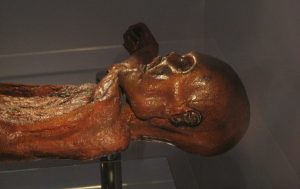 Lead researcher of this current study, Michael Zimmerman said there should have been plenty of cancer-related evidence available in ancient societies because they lacked effective healthcare.

‘In an ancient society lacking surgical intervention, evidence of cancer should remain in all cases. The virtual absence of malignancies in mummies must be interpreted as indicating their rarity in antiquity, indicating that cancer-causing factors are limited to societies affected by modern industrialization’ – Zimmerman said.

Professor Rosalie David, who also played a key role in the analysis of the possible reference to the disease in classical literature, fossil records and mummified bodies, said:

‘In industrialized societies, cancer is second only to cardiovascular disease as a cause of death. But in ancient times, it was extremely rare. There is nothing in the natural environment that can cause cancer. So it has to be a man-made disease, down to pollution and changes to our diet and lifestyle. The important thing about our study is that it gives a historical perspective to this disease. We can make very clear statements on the cancer rates in societies because we have a full overview. We have looked at millennia, not one hundred years, and have masses of data. Yet again extensive ancient Egyptian data, along with other data from across the millennia, has given modern society a clear message – cancer is man-made and something that we can and should address.’

What researchers recommend as prevention of cancer is a healthy diet, more and regular physical activity and maintenance of a healthy weight. These three lifestyle choices are believed to be able to prevent about a third of the most common cancers known to researchers. 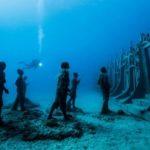 Endless And Mysterious ‘Underwater Wall’ That Encircles The Whole Planet...